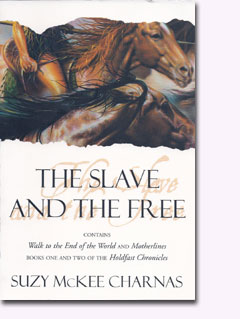 Books in review; Some thoughts on the story of a speculative ultimate ‘War to End All Wars’ —
the War Between the Sexes.The Holdfast Chronicles, is an epic saga of a post-apocalyptic future told in four sequential novels written by Suzy McKee Charnas:

Book 1 – Walk to the End of the World

The story opens with an introduction to the post-apocalyptic society of the strictly sex-segregated Holdfast, and three main male characters, Captain Kelmz, Eykar Bek and Servan D’Layo. For much of this first book, we see Holdfast society entirely through the eyes of these men.  ie. Through the ‘Male Gaze’. As a literary technique this is enormously powerful, as we see the horrific conditions of the enslaved ‘fems’ only in very brief background glimpses, in occasional throw-away lines like having the men mentioning in passing as an aside, the awful smell of witch-burnings in the public squares, all spoken of through the voices of male casual indifference.  For the bulk of their conversations are about their personal issues, and the current male-stream politics and the growing feelings of revolt of the ‘Juniors’ (young men) towards the ‘Seniors’ (old men).

The relationships between these men, and the main plot following the men and male-stream politics of the Holdfast, is multi-faceted, complex and not stereotyped at all.  Charnas’s great skill lies in her development of believable complex characters, which invites reader’s sympathy (particularly for the older Captain Kelmz) while inserting occasional and brief cold-shower slaps in our faces with the blood-chilling casual violent misogyny towards the invisible ‘fems’, and the complete indifference of the men to the fems.

One of the most powerful feminist themes in this section, is the demonstration of just how deeply misogynist even the nicest of guys can be, through the casual indifference of the ‘Male Gaze’.

Servan is drawn as a street-wise petty criminal, a rogue, openly rebellious against Senior authority, whereas Eykar is portrayed as an intellectual, a reader, a thinker, constantly questioning everything, including the beliefs he was raised with, the beliefs of the Seniors who rule them, and other Juniors. Both young men had been exiled in different ways as their punishment for a boyhood crime they committed.   Eykar escapes his punishment exile and whilst on the run, enlists his boyhood friend Servan’s help in finding Eykar’s ‘father’.  Parentage is deliberately kept unknown in the Holdfast, but Eykar’s bio-father had marked the fem who bore his son.  Servan suggests they go to the old fems, the ‘Matris’, for information and also have friendly Captain Kelmz to help them.

The Matris agree to provide considerable help to Kelmz, Eykar and Servan, and in return for their help, the Matris request that the men take along a young fem, Alldera, to act as a carry-fem (or pack-animal) on their trek across the Holdfast.  The story continues with Servan and Eykar’s travelling party on the run from the authorities, and with the whole Holdfast region on the verge of major famine and civil unrest, with war brewing between the two main cities.

As becomes a central key theme throughout the later books, the relationships between women are the most interesting, complex and thought-provoking of Charnas’s feminist themes.  For ultimately, it is the ways in which women relate and communicate with other women – (not men) – that underpins women’s liberation.

Through her complicated well-drawn characters, Charnas explores in depth issues of why women often collude in their own oppression, ignore it, deny it, endure it, or rebel against it – the central struggle between “peace at any price” and the desire for “freedom at any cost”.

In the second half of the book as the party of men race across the Holdfast with war brewing – through Alldera, the young fem trained illegally as a runner, we learn more about the inhuman brutality of fem’s lives. We also learn why the Matris had manoeuvred Alldera to be sent along with the men, with her secret task to “Walk to the End of the World”.  Alldera’s task was to return after an absence, and provide the Matris with a false ‘message’ of hope, from the legendary mythical ‘free fems’ living outside the Holdfast. The message designed by the Matris was to encourage the slave fems to “hold on” and not revolt or cause trouble, lest they bring down much worse destruction on all fems.  One of the “peace at any price” strategies, for the rebellion of a few slave-fems brings punishment down on all fem-slaves.

Later in the story, Alldera is raped by both Servan and Eykar, but Eykar is also thrown into close quarters with Alldera and true to his incessant questioning intellectual curiosity about life, the universe and everything – he wonders about the fems – (apparently for the first time in his life).  Alldera’s deeply cynical sarcasm in response to Eykar’s naive questioning is just one facet of the author’s brilliance in characterisation, dialogue and world-building.  In his relationship with Alldera, both are drawn to an almost cautious mutual respect in some scenes, but not for long – as Eykar cries with anguish in one of their last conversations – ‘There can be never be anything but rape between us’.

Eykar, Servan and Alldera eventually reach their destination, but amongst the sudden eruption of a war, Eykar helps Alldera escape to the Wilds.

This much longer novel covers the story of the next 15 years of Alldera’s life away from the Holdfast in all-women societies. The story begins some months after the first book ended, Alldera is still alone, wandering lost in the Wilds, starving and unhappily pregnant, and is found by a late season patrol of the Riding Women – descendants of women imprisoned in an isolated laboratory who had been genetically engineered to reproduce through parthenogenetic cloning.

Alldera, being obviously pregnant is taken back to a Riding Women’s camp to birth her daughter amongst them.   We also learn of a nearby community of “free fems” – escapees from Holdfast who live in their own camp, tolerated and partially supported by the several Riding Women’s communities, but through mutual agreement, not accepted to live among them.

Several themes are explored in Motherlines.  One is the theme of ‘culture clash’ – these two all-women communities are very different from each other – and refreshingly, the Riding Women are not presented as the standard cliché of sugar-sweet fantasy lesbian utopia, so commonly found in speculative feminist fiction particularly from the 1970s.  The free-fems, all ex-slaves also have their own issues to deal with – eg the great differences between individual experience of communal slavery are also explored, through relationships between the individual characters.  These are often painful scenes, exploring the “oppression olympics’, or the ‘Heirarchy of Oppressions’ as the free-fems compare notes on differing forms of the slavery they endured in the Holdfast.

Again, Charnas’s greatest skill is in building a complex plausible world, with multiple major characters, and doesn’t shy away from exploring painful issues of conflict, jealousy, and power relationships.  Having physical freedom, doesn’t mean you can automatically throw off the chains of generations of slavery.   For the Riding Women, their lack of understanding of the free fems is sometimes hilarious, sometimes distantly compassionate, and other times even unintentionally cruel or intolerant, but always realistic – for the Riding Women have never known men or oppression, and struggle (and sometimes fail spectacularly) to ever understand such lives as the free-fems have led.

At the free fem camp, Alldera unfortunately still finds herself an ‘outsider ‘– hoping to find a community in which to belong as an ex-slave of the Holdfast, her years amongst the Riding Women have still changed her, and she is impatient, angered but mostly deeply grieved by the free-fems petty internal fights.  Having known no other way, the free-fems have loosely modelled their own community on the vicious male heirarchies and power relationships of the Holdfast.  Alldera is almost permanently crippled in a vicious attack when she tries to leave the camp, to strike out on her own.  The free fems do work through a number of issues as events unfold and time passes. Sometimes deeply painful, shocking, sometimes hilariously funny, but through long dialogues and scenes readers are drawn into empathising with these differently damaged women through a slow, healing process.

Alldera eventually leaves the free-fems and wanders alone for some years – on her own personal ‘Journey’, as well as the book following in-depth the lives of a number of other major characters in both of the women’s communities.  Alldera teaches herself to ride, and with much adventure, including learning to fight, use weapons, raid for horses, having her daughter Sorrel reach puberty (when the original co-mothers are expected to return to help the girl transition from childpack to adulthood), Alldera is eventually accepting of, and accepted into, both the Riding Women and the Free-Fems.

Alldera ultimately decides to return to the Holdfast and fight back, and free her sister slave fems.  Most of the free fems also decide to join her – but most of the Riding Women communities, are totally opposed to the decision and even try to stop them by force.  A handful of Riding Women join the free-fems, partly out of desire for adventure, exploration and curiosity about men in general.  The book ends with the women leaving for war against the Holdfast.

As with the first book, the major theme explored in such detail here, is that ultimately, it is the ways in which women relate and communicate with other women – (not men) – that underpins women’s liberation, and finding a re/solution of the central struggle between “peace at any price” and the desire for “freedom at any cost”.