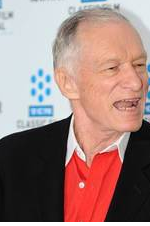 Angelwish is a charity whose mission is to provide gifts to children living with HIV/AIDS, asthma, diabetes, kidney disease, and other chronic illnesses.

On Feb 12th, Angelwish gave Hugh Hefner, founder of Playboy magazine and worldwide misogyny promoter, its Humanitarian of the Year award “for all his charitable efforts over the years.”

Angelwish, a charity dedicated to an uncontroversial cause, provides strong approbation and endorsement of Hefner by giving this award. It has not seen his lifelong commitment to hate speech against women as inconsistent with the descriptor “Humanitarian”.

But why exactly are Hefner’s actions and lifestyle inconsistent with the term “humanitarian”?

The term “humanitarian” is defined as follows:

Playboy magazine’s existence has made it socially acceptable to objectify women. It has opened the door for much more hard-core and dangerous images. It has glamorized the sale of women’s bodies for the male gaze.

These days, the Playboy brand also distributes hard-core pornography through websites and pay per view. The money Hefner donates to Angelwish has been wrung out of the objectified bodies of the women he exploits.

Surely, the creator of this empire of misogyny is no humanitarian.

Additionally, Hefner exchanges money, fame, and centerfold status for sexual relations with his “girlfriends”. These women are prostituted– they are f’ked by a man 60-70 years their senior without using protection for a chance at fame.

But how can that be?

Because according to Angelwish, women are not human.

If Angelwish does not believe women are human, where did this charity get this idea?

Perhaps it is through the patriarchal society we live in, where women in the US are paid 23% less than their male counterparts  and 1/6 of them will experience an attempted or completed rape in their lifetimes. Worldwide, ¼-½ of all women have been abused by intimate partners, and 160 million women and girls are missing from the population.

Hefner’s son Marston has well learned the lesson that women are not human. Just this week, Marston Hefner’s girlfriend filed a restraining order against him after he physically assaulted her. Says  Marston of women, “My, like, expectancy for what girl I’m going to get is, like, so f*****-up. ‘I’ve just been around really hot women my entire life, so the average high school girl won’t do it for me.”

We demand to be recognized as human.